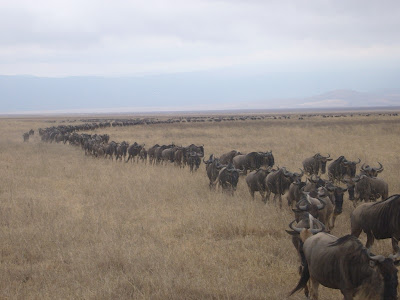 They say this migration is one of the 7 new Wonders of the World. For now, I can merely rave about the raw power I witnessed, as thousands of wildebeest stampeded through the Mara River. Nothing quite prepares you for this visual spectacle. 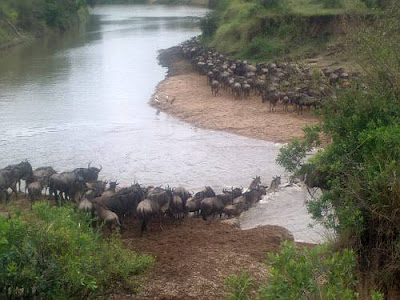 The stage on which this show is set is loosely termed the Mara Ecosystem, pretty much defined by the dominant migration. The principle players are the (approx) 1.5 - 2 million wildebeest, supporting roles from 350,000 gazelles and about 200,000 zebras. These wildebeest are predated upon by the lions, hyenas, leopards, cheetahs who await the annual coming of the migration with eager anticipation 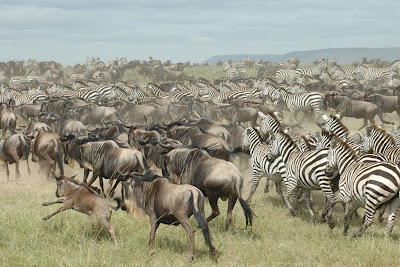 Thousands and thousands of wildebeest scattered across the plains, muster up the courage and slowly form lines as they channel towards the imminent river crossing points. These crossings are the most dangerous stages for the migrating wildebeest, with the river current often sweeping the animals downriver and into the opportunistic jowls of the waiting crocodiles. 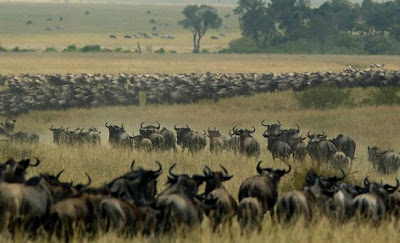 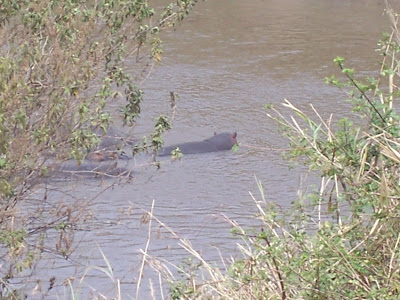 Now is as good as any a time to introduce our driver and guide, Sammy boy! He has been leading the Park Safaris for over 20 years  He was our go-to safari man for his encyclopaedic knowledge, his eye for spotting game and his wealth of anecdotes about each and every park in Kenya. He was a tall man, with a sunny smile and a great sense of humour :D  Suddenly the now-familiar ringtone of Sammy’s phone crackles with static, within seconds Sam accelerates across the plains, bouncing up and down over the land. We had no idea what was going on. It turned out that the wildebeest were clustered around the river’s cliff side edge, and primed to cross. The walkie talkies were ablaze with excited chatter, Sam, unlatched the roof of our jeep so that we had an unobstructed view of the grasslands around us, we exchange bemused looks amongst ourselves, listening to Sammy’s Yoda-like responses :D 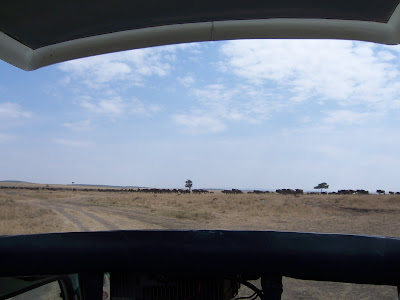 After a few minutes, we caught sight of the flowing muddy waters of the river – perhaps 15 metres wide at that point. The river was flanked either side by crumbling dusty cliffs. Amongst the trees that populated the riverbank, 8-10 jeeps and minibuses jostled for prime viewing points on the river’s edge. Sammy expertly weaved his way through a great vantage point. He turned the engine off, and we gazed at a group of wildebeest huddled around the cliff edge towards our right side – impatiently shoving and pushing each other. The wildebeest at the front peered precariously over the edge to the swirling torrent beneath. Crocodiles floated under the surface, vultures circled above opportunistically and downstream the chewed carcasses of the dead wildebeest had been washed ashore. The jungle flies were all around us buzzing most irritated

As the minutes passed, more and more wildebeest arrived at the cliff top, with the group at the front struggling to resist the relentless pushing from behind. And then suddenly there was a burst of activity. The first wildebeest could resist no more, and was pushed over the edge, beyond the point of no return. Plumes of dust shot into the air, as the wildebeest accelerated down the steep cliff and then through the rushing water of the river. It jumped up and down through a cloud of white splashing water, fighting against the current of the river, nervous and crazy with fear. And barely after about 15 seconds of intense activity and panic, it finally emerged at the other end safely yet exhausted. Within those few moments, the calm of the river had become a mass of churning white water with the first wildebeest providing the catalyst for a line of followers, one after the others, accelerating through the water with their lives dependent on it. 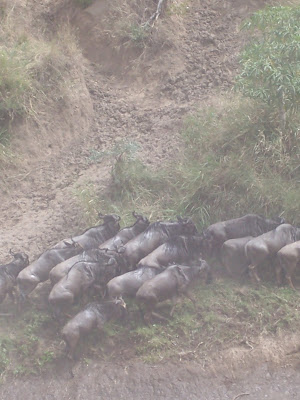 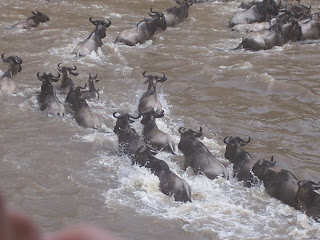 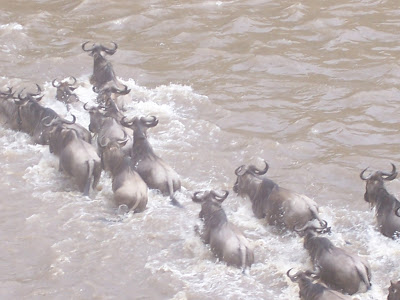 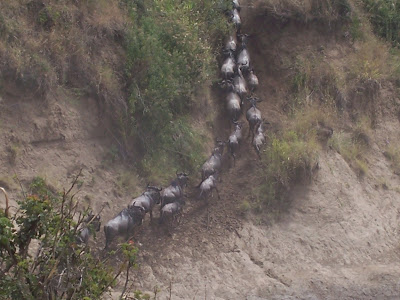 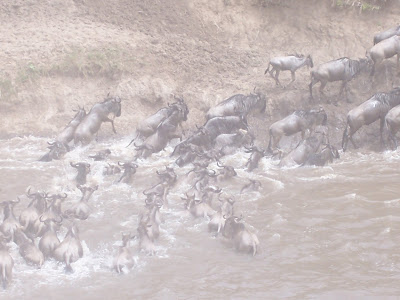 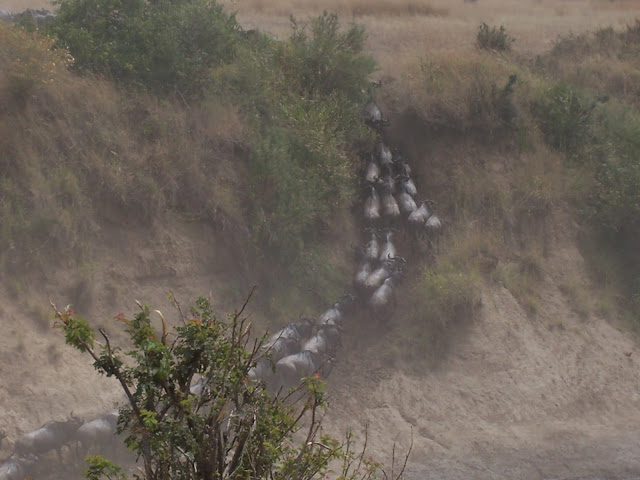 On the near side of the river, the successful crossers stood panting, shaking off the excess water from their sodden coats, and peered back watching out for friends and family 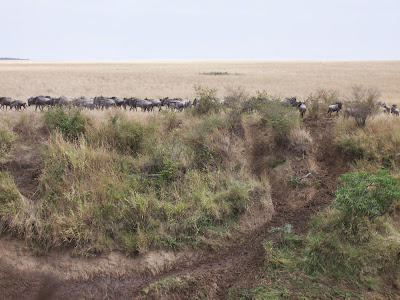 .
We saw a 100% safe crossing, no 1 beast got swept downstream. Watching from the side seemed like a sick voyeurism – picking out who would survive and who wouldn't  Darwinism was playing out in front of our very eyes. And after a flurry of activity – no longer than 15 minutes in all – calm returned to the river. I found myself clapping happily seeing all the animals had safely crossed over, not a single injury or any other incidence. Some in the car lamented the fact that they wish had seen a kill (crocodile) – am glad I didn't. 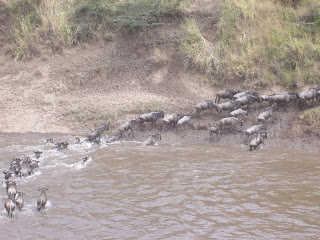 The rivers and indeed the few isolated lakes in the African Savannah, are terrifying to the wildebeest firstly because of the animals’ fear of the water itself and the creatures it may hide, and secondly because water generally means vegetation, and thickets that may conceal predators. Yet the wildebeest have an inherent instinct to trek in a certain direction at any cost – despite their terror. It was just another stage albeit a major part of an otherwise perilous journey, for the wildebeest. This below image was provided by our Korean friends who saw yet another day (after we left) of the great migration 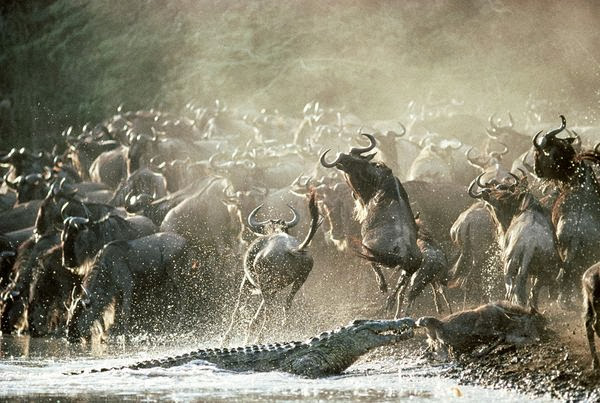 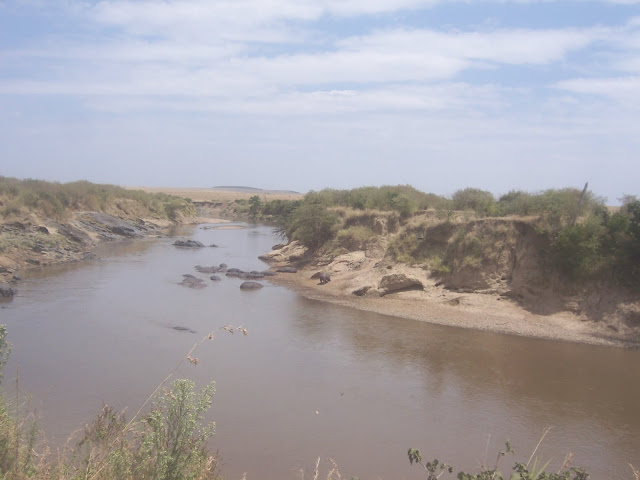 Wildebeest arrive at the Mara River in their tens of thousands, and gather waiting to cross. For days their numbers can be building up and anticipation grows but many times, for no apparent reason, they turn and wander away from the water’s edge. Eventually the wildebeest will choose a crossing point, something that can vary from year to year and cannot be predicted with any accuracy. Usually the chosen point will be a fairly placid stretch of water without too much predator-concealing vegetation in the far side, although occasionally they will choose seemingly suicidal places and drown in their hundreds.

We lived our dream trip, saw this beautiful great migration. We are richer and blessed for it. I can continue to dream about it for a long time to come.