What I saw in Beijing testifies the city’s power as the nerve center of the country. The Tienanmen Square is buzzing with security, No cars are allowed to park close to the historic buildings. The capital city has more security, barriers and policemen than normal Chinese people, I think. The mama mia factor when you see the Tienanmen Square, despite the effort and the long walk are unreplicatable! It's bigger than life.

Tienanmen Square is the world’s largest public square (the size of 90 football fields); it still reverberates with the ghosts of recent history. The vast inner city of 24 emperors for almost 500 years, is China’s most impressive treasure house. Only occasionally an emperor would venture out, And no one was allowed in without permission.

The Forbidden City is located in the center of Beijing and is surrounded by a chessboard of roads, including five 'ring roads', which circle the city center in concentric circles. I liken this to Delhi for some obvious reasons. Roads lined with trees that create beautiful facades and avenues. All buildings of national heritage or government offices bearing the national flag. Zany cars with sirens that go off suddenly in the middle of the road signaling vip movement.

Cameras track everybody. They follow you in the foyer of an office building, they trace you to the landing you get off, tracks you inside the floor visiting people. The cameras are not subtle. They are un-missable, making no bones of the fact that they are watching one and all.

Beijing also has some unique shopping areas. My friends took me to this mammoth horizontal (one storied) building that boasted of fake branded goods. From I-pods to steam irons to clippers to beaded ornaments to hi-phone to chinese arts and crafts to fake Nikes and Adidas’s to all imaginable designs in jeans - the list is endless. And there were takers. The parking lot was full. People were making a beeline into this market because soon it was going to be closing time and the trader/shopkeeper doesn’t want your business if it is past his shutting down time! I walked away from this market with tiny ceramic Chinese figurines which I distributed amongst my office colleagues. Crafted beautifully. Looked authentic. Were lil china men smiling and fishing.

The Kunming lake at the Summer Palace is another bewitching huge site a complete must for a tourist like me. Such scenic beauty, such calm waters, history in every nook and cranny. Ornately decorative architecture from both inside and outside. There are dragon boats and marble boats used for cruising on this lake. Even these boats have a history which the Chinese are not too fond of speaking. I discovered that the Marble boat which is moored at one side of the lake was built from money that was allocated from some other purpose. Very India like, I said to myself most amusedly. Corruption is not spoken about openly here. But exists in equal gigantic proportions.

China is a land of overt discipline and subjugation, a land where people may question the authorities in their mind but never openly or ever in rebellion. It is regimented and authoritarian. Maybe that’s why the billion plus nation can produce world goods at a pace no one can match? Works for this country I guess
Posted by Mee at 03:51 16 comments:

Watching your every move - Singapore 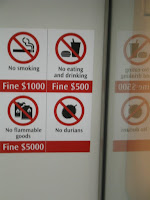 This island city, in olden days, was managed by the East India Company. In its marshy heydays it was a trading outpost. And over the past decades Singapore has transformed itself to a plan. As a result today you see this tiny land, flourishing in prosperity and success. It’s a curious blend of ancient and modern sights. At first glance it’s the modern that meets the eye. Gleaming, shiny, tall almost scraping the sky, buildings. And then you see these tall structures dominating the diminutive squat Hindu and Chinese temples in the interiors of this land.

Am not a big fan of Singapore. In fact quite the contrary. However there is one thing that I wish we in India could emulate. And that is their strict no nonsense laws! Generally, the laws are strict and it is because of those stringencies, why Singapore has risen to a World class city status. There are always pros and cons to the strictness for sure. No arguing that.

Singaporeans don't mind the strict laws one bit. Big brother is always watching you in Sing. You can't see them. But you know they're there. Undercover. Watching. Scanning the crowd. That's why the locals are very careful.

Chewing gum is not a sin in Sing, but taking gum into the country in large amount is illegal and the person can be sent to jail. Try going nude or topless when sunbathing, even if in your own back yard. It is forbidden. Jay walking maybe the favourite past time in India, try doing that in Sing. And watch the undercover guys swoop down on you. There are many reminders - posters are put up at eye level everywhere - you cant miss it, telling you what you should do, and if not done, how much you will be fined if you break the rules. That is the reason why Singapore is called "the fine city"


The government in Sing has obviously discovered that the only way to keep the small country clean, safe and manage it efficiently, is by, enforcing some strict rules. A densely-populated city like Sing has thrived to prosperity because of its regulations in all aspects of life which in turn has helped them maintain high health standards, low crime rate, and intolerance for corruption. They have a disciplined work-force and a credible judiciary and police systems to ensure a high level of law and order. Orchard street the most famous shopping street has many plainclothesmen hidden in the crowd. Some 400 plainclothes officers from the government's National Environment Agency. Their job: to pick out those who let things slip out of their hands.

Such an approach has made Sing high on the list, as one of the most livable cities in the world, to attract both tourism and investment. Only with strict laws and efficient govt administration have they managed to maintain high stability in the political, social and economic stratas. It is seen as being one of the very safe and orderly countries by many. There is virtually no crime; no corruption and you are safe even when walking alone at night. Unless you happen to be unlucky and be in some crowded area where pickpockets thrive.
Posted by Mee at 07:44 15 comments: