Yes I might be a lil biased when I say Varkala is a stunner, certainly so, when looking down on the beach from the red cliff path! But the real beauty of Varkala is its laid back atmosphere. There’s no beeping horns, smoke-belching exhausts or lunatic driving. Indians don’t really holiday in this part of Varkala and you generally only see ‘foreign’ faces – mostly backpackers. 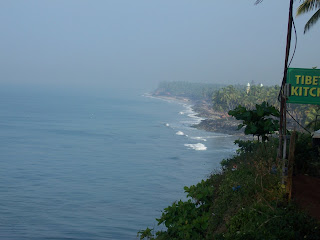 A strip of restaurants, souvenir shops and hotels stretches along the cliffs for about a mile and apart from the halfhearted attempts from the vendors to attract you into their shops for a look (‘looking is free’, apparently) it’s a lovely walk to do. While some roads run perpendicular to the cliffs (and a few directly to the sea), the main artery is a brick pathway that runs for about 2km along the edge of the cliffs; there are no vehicles allowed here, although the rare motorcycle does slowly putter by.

Along with restaurants, hotels and guest houses facing the sea together with shop after shop selling jewelry, clothes, wall hangings, etc. which is just the first row, further back among the coconut palm trees you can find many more rows of hotels of every price range (there is road and vehicle access back there) and occasionally more shops too.

We were ridiculously lazy in Varkala but, in our defense, it’s that kind of place. There’s very little to do aside from yoga classes, Ayurveda massages, eating and drinking. Time was spent reading in the hotel garden overlooking the sea, or eating and drinking in one of the many stunning restaurant roof terraces which line the cliff edge and have fantastic views over the beach and water below - the Sundowner heaven 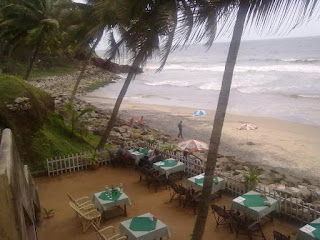 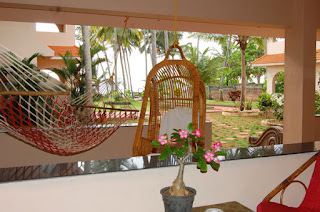 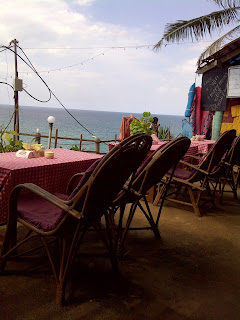 Each restaurant had more or less the same menu, with a huge selection of Italian, Thai, and Chinese and of course Indian dishes. None were stunners, after having experimented the varied many eating places the first few days; we settled into a pattern with a handful good ones. There are plenty of restaurants, all with amazing views; mellow music and a few even offering free Wi-Fi. 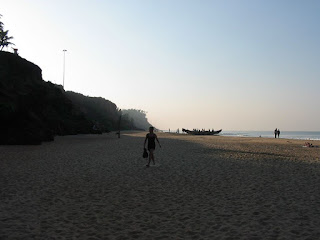 After an early morning swim we’d ascend the cliff to park ourselves for breakfast at the Cafe Del Mar or Abba for an English or American breakfast. Food was always fresh, delicious and mostly organic. Varkala is a sea-food lover’s paradise. Many restaurants display in front seafood caught by the local fishermen. Select your food, get it prepared and savour it watching the sunset. The ubiquitous Kerala food is not easy to find on the cliff unfortunately. Coffee Temple was our temple for good coffee especially given the need for good quality caffeine.  Frozen yogurts is a lovely place to visit for its ambience and cheery mood, simply makes you happy. Blue Marine restaurant and Ginger café were also frequented by us for dinner/snacks when the urge was to have Indian food. 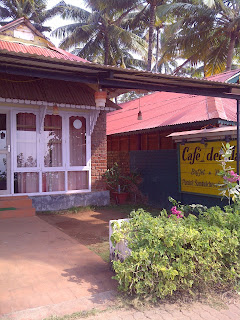 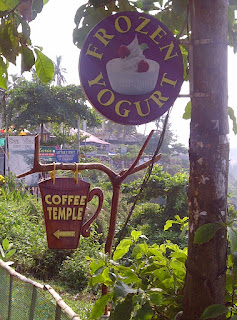 It wouldn’t be unfair to say our best meal was the last meal in Varkala - at the hotel, when the cook, especially prepared for us, soft idlis, dosas and crisp crunchy vadas with piping hot sambar and chutney. That said, the beauty about a place like Varkala is- it is nice to be able to sit in a restaurant and actually take as much time as you wish over your drink/meal. No one will hurry you up, fire you a cup of tea swiftly followed by the bill, and get you out the door as soon as possible to make way for the next customer 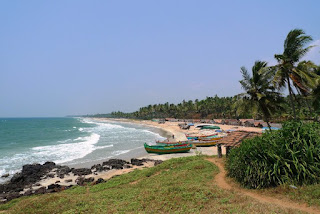 Varkala is beyond anything that we had envisioned—in a good way. Or perhaps then, we had very little expectations. One never tired of the view from on top of the cliffs, one soaked in the laid back energies. Everyone in Varkala is very friendly.  I often find that in a really chilled out place like Varkala where there is little to do but relax and watch the world go by that I find myself contemplating my life, my plans for the future and the ‘what’s life all about’ conundrum :)
Posted by Mee at 23:09 25 comments: 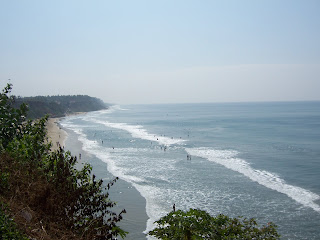 We arrived by night in a hotel that was nicely lit. After freshening up we stepped out to explore the property and the beach. Our friends were holidaying in another hotel, we had to meet them for dinner, so they asked us to walk down the beach road towards Clafouti. We asked the hotel staff for directions for the ‘beach road / cliff path’ and here we came up with some early ‘learning’s’:
v  English language is an alien communication tool for the locals
v  Sense of distance is equally foreign to them
v  Power blackouts is a constant phenomenon in Varkala
v  Toddy (liquor) is a constant companion to most local males
v  DO NOT expect professional anything :D

We walked from our room to the boundary of the hotel property, guided by the sound of the ocean surf, wanting to locate the “cliff path” - we reached the edge and looked down and saw the white surf of the waters, and just then there was a complete blackout. Complete darkness! Slowly a few lanterns lit in the distance…but not enough to show us clearly what was “the beach road / cliff path” -since we were not yet familiar with the geography of the locality, it was unnerving standing in the dark, we retraced our steps back inside the hotel. 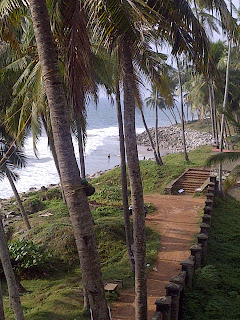 We requested for transport as the Hotel staff said Clafouti is approx. 2km away. He called for an auto whose driver was drunk- the auto in standstill mode, was sliding in the reverse, the driver was oblivious to it. We asked the Reception to get us another auto, but the Receptionist told us its ok, he is in control, there is no problem- so despite our senses screaming otherwise – we took this transport. Given it was late, given it is a small town, given friends were waiting, given we wanted dinner and some sleep for that night.  The worst auto ride ever! 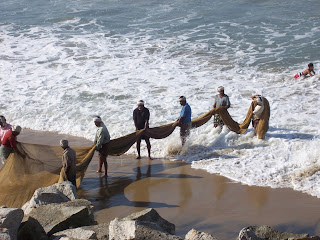 The 2km distance turned out to be less than 2 minutes for which we paid 100 bucks. To top it, our nerves were grazed, being on the edge with the driver reeking of alcohol, not in control of his auto on the upward climbing slope, on a pitch dark narrow road, with not a person in sight (post the Delhi incidence) was a horror of all sorts, the mind was working its wily hands about! Such was our relief to have reached Clafouti in one piece- incidence free, unbridled joy was the only feeling we soaked in!

It took us the rest of the trip to realize that these (above) first impressions (while some maybe true) – were a bit harsh. Largely speaking - the locals are harmless even when drunk, they are genuine, warm, and honest and trusting them is easy as they are humble; despite the city menace narratives we all unconsciously carry about with us.

Varkala is beautiful. A wonderous place. It is a Hindu belief that a dip in the Papanasam beach of Varkala can wash away your sins. What I can indeed say with certainty is that it will wash away the stresses and strains of a busy life. Our hotel was situated on the seashores of the magnificent beach of Varkala, providing us a panoramic view of the setting sun, the lashing waves, the coconut orchards, the fishing boats & the anglers at work.

You cannot tire of walking on the beach cliffs, enjoying the freshness of nature, be a sun bathing enthusiast or simply be; on the silky beaches, around the many hotels dotting this 2.5-3 km stretch called Varkala. The walk along the cliff takes you to many interesting spaces, some offering Ayurveda massages, special oils, yoga classes, even a library while you wait for your order or sip on a drink.

What is unique about this sea resort destination is that Varkala is a small town, pretty much off the beaten track. Located an hour away from the Trivandrum airport, the growing number of curious travellers who decide to stop by and then end up planning their next vacation here, is a testimony to the fact that Varkala is getting popular. (PS: not sure if that is a good thing tho…) 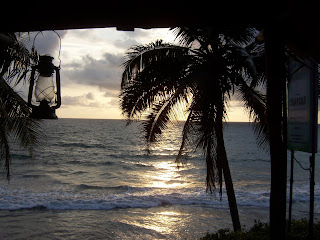 Varkala is a virgin beach with a beautiful cliff lining the beach stretch with a string of eateries and shacks offering a choice of world cuisines. The walk that seems to lead you to the end of the cliff gradually slopes down until you find yourself climbing down on to the other side of the beach. It is also a more secluded area on the beach which some tourists who discover the path, seem to prefer. No matter how many times I walked along the cliff road separating the sea and the hotels/shops, I invariably was tempted to stop and soak in the sights a zillion times over. Having grown up in cities and metros most of my life, one finds here the peace and tranquillity that the human soul craves for. 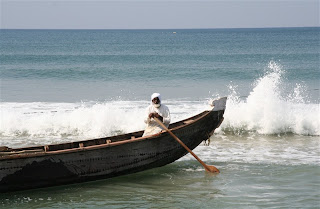 I mean where else would you find yourself standing under a canopy of palm trees staring at sparkling, calm aqua blue waters lapping gently at your feet and then turn around to see the tumultuous waves crashing against the rocks along the shore on the other side. And all this under a clear blue sky forms the perfect setting for an artist to capture.
Posted by Mee at 00:09 25 comments: