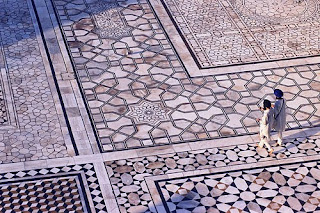 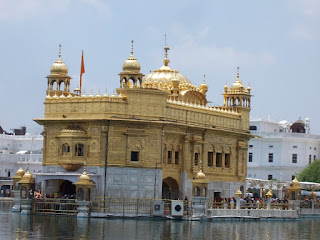 I distinctly recall our car was not allowed to drive through the barricades, the driver furiously negotiating with the cops, we waiting patiently inside the car knowing it will all sort out and eventually we did drive through to reach The Golden Temple

It was a very hot and humid day. Amidst much noise and so many people and the bustle of the narrow street, my head had begun to call out for help! I drove past the site of Jallianvala Baug and my heart felt for all those that died here.

With these emotions churning within I stepped out of the car covered my head as tradition demanded and entered Shri Harmandir Sahib/The Golden Temple. We first stopped to leave behind our shoes in safe keeping. And then walked on the hot marble to climb down the steps towards the Sarovar.

The only sound I could hear was the religious songs being sung in the temple. I was immediately overwhelmed by what I saw and felt. The nearest thing I can describe was a feeling of calm quietude descending on me. A coming home kind of feeling. I felt like I was meant to be there. I walked around struggling to ensure my chunni stayed atop my head, trying to absorb as many views as I could of this magnificent place. There has to be something in it. My senses couldn’t comprehend it but my soul could.


A holy place packed to capacity with the weekend crowd. We did our parikrama of the sarovar (water pond in the center) twice over – to a feeling of satisfaction.

The white marble we walked on was burning hot reminding me of how in the old days people may have had to walk over coals to seek atonement. With an utter feeling of a high, when the prasad of kada got handed out I was simply felt blessed. The Golden Temple. This place was all that I had heard about and more.

Large, bustling with activity, crowded! Yet everything had a sense of peace and calm. The shabad kirtan had a soothing effect and after pausing to take in the beauty of the Harmandir Sahib, we joined the queue to enter the inner sanctorum. I am always pleasantly surprised by the cleanliness and discipline exhibited at Sikh gurudwaras. The marble flooring was spotlessly clean and irrespective of the size of the crowd nobody pushes or tries to get ahead – quite unlike some of the temples that I have visited. I was quite impressed with the intricate carvings and detail on the walls and with the fact that everybody tries to do some seva (selfless service) here.

I had initially planned to taste the famous langar but the humid weather and the morning breakfast made me pass it this once, but will give it a try another time.

In here nobody goes away hungry. For pilgrims and the poor, there's the divine langar. For the souls seeking more there is indeed more. And for the tourists and the locals, there's the ubiquitous dhaba

I find myself ill equipped to close this post, deep inside me I know I will definitely return to The Golden Temple soon.
Posted by Mee at 05:08 12 comments: 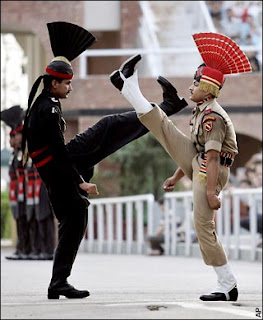 I had heard a lot about the retreat ceremony at the Atari-Wagah border, some 28 kms from Amritsar, the only road border crossing between India and Pakistan.

While we did our best to reach before time and just about made it on time, we had not factored in the weekend crowd and just about managed to squeeze into a crowded stand which only had a partial view of the gates. The mood was soon set by a large group of school girls dancing to Hindi film patriotic songs. Some foreigners too jumped in with much dancing and waving of arms and legs. It was a great setting – the evening sunset, a few Indian flags in the crowd, smartly turned out BSF soldiers who looked so tall like the Pathans of Afghanisthan and amidst a lot of patriotic sloganeering – I couldn't help but feel very proud as an Indian, proud as never before.

Be prepared for an assault on the senses. We were surrounded by smelly wet perspiration soaked Mango People who despite the mad mad rush allowed us some room to stand without being felt over! People were on a high here, suddenly it seemed that all standing in the Indian side of the balconies were feeling a tremendous rush of pride and honour in being there watching and participating in the retreat. I was keen to get started on some ‘forever etched in memory kinda shots’ with my camera, but trying to find a comfortable spot, balance myself, not tip over and yet not come in the way of someone else, was a gigantic task! We pushed through the crowd and managed to reach as close we could to the balcony railing. I could see the other side of the border – the Pakistani Rangers in their black Pathani suits and a quiet audience that sat very orderly in the audience galleries on the other side of the border.

The ceremony started with some smart drill and marching by the BSF. The jawans kicking their heels incredibly high and putting on a show of mock face-off with the Pak rangers, much to the delight of the crowd. A white line that came along with the partition in 1947 by the British demarcates the border between India and Pakistan about a yard apart. The soldiers drill with pounding long strides on the grounds as the two iron gates are shut with a final handshake. The ceremony invokes nostalgia among the visitors and offers something that one cannot afford to miss as a short excursion from Amritsar.

After a while I found myself being repulsed by this show as I found it to be too threatening in stance and too combative and confrontationalist! All this fervour was drummed and beaten up by an orchestraor (DJ if you wish) who signaled the crowds to cheer and boo according to his commands! My initial feeling of patriotism gave way to a feeling of sadness, a feeling of being let down. Perhaps because I have always had the highest regard for our army. So when they do these public theatres like at the Wagah border it felt so staged! The entire ceremony became repetitive and farfetched.

I had had enough of the hot humid weather and the milling crowd and the harsh sun and I just wanted to get back to the air conditioned comfort of the hotel room. But there was no way out from the jam packed stands, so we waited some more and finally all of us just decided to make our way despite the milling crowds who magically allowed us a path out, we left before the ceremony was completed. As I walked back to the parking after the ceremony I could not help wondering about what the soldiers would do once the crowds had melted away. Would some of them casually saunter off across the border and share a drink with their counterparts? Or, perhaps share some jokes with each other on the way the crowds behaved today vis a vis the previous weekend. What if the border had actually been drawn a few more kms north. Wouldn’t some of the soldiers guarding the frontier, be probably guarding it from the other side? What choice does an individual have in choosing his Nationality?
Posted by Mee at 21:22 14 comments:

Playing glutton in the land of milk and ghee -Amritsar

I was told by friends that often the locals prefer to send out for food rather than cook in their kitchens, now I know why:) The food is not only hot and tasty, its also fresh and clean. Despite my fears of the water they served to drink and the watery chutney and the not so fresh looking diced onions given as accompaniment with the kulchas not once did I suffer any tummy problems.

I have never eaten kulchas like this ever before in my life! Crunchy, tasty, mouth watering, so yummy that I could not desist from having more than I should have had! The Amritsari kulcha I devoured with relish, its for those who may not know much about a kuclcha- a flaky crisp white flour bread stuffed with potatoes, spiced onions chilly and pepper, jeera and anardana on the inside and roasted in generous dollops of butter to give that crunch. This kinda kulcha cannot be found anywhere beyond Amritsar I swear to you . A tiny ramshackle place in a side street off the main road dished up this tasty meal which I ate with tasty chole (albeit a bit watery) and green chutney which I washed down with a brass tumbler full of cool lassi. It was no over exaggeration that the best bread is available on the streets of Amritsar

This journey of food exploration from the streets of Amritsar certainly made me believe all I had heard thus far about how tasty food is in this city! Amritsaris do indeed dish up the most flavoursome and fragrant of food at the humblest of prices At dinner time I ordered straightforward simple food and given how ravenous I was, I downed most of it but must acknowledge that Lonely Planet probably is not the best judge of good north Indian food

At first glance Amritsar belies of prosperity, wealth and a certain influx of internationalism. The more I looked around and observed the more I detected a certain humbleness, a quality that many who were selling would not compromise on, a certain respect allowed to the women despite the hot bloodedness of the males from these parts of north India or the over crowded streets where congestion word was probably discovered.

My observations - chaos is not a bad thing, am sure there is definite method to any madness. However does chaos have to mean mess? Chaotic traffic? Dilapidated buildings? Guess the Govt doesn’t care but do we stop caring? Our cities look equally bad so not once am I passing any judgment here- all I am seeking is some of us need to wake up and stop accepting this degeneration quietly . We live in a sorry state and we shouldn’t be. We need to change things – we need to reflect care for things, we need to demand better things for ourselves from ourselves. And not allow it to get from bad to worse. And this observation is true for most of pilgrim cities I have visited in India

All too soon, it was time to head back home, while I was keen to get back to Pooch I also wished I had some extra time in hand to stop and buy Amritsari papads and Pinni’s and gur halwa for family and friends. I sat a tad wistful in the plane that it was all over too soon, but promised myself I would come back here with family and take in the sounds and smells and everything Amritsari slowly and joyfully and savour it. I remember seeing this little kulfi shop, the name of which I cannot recollect. I wanted to stop and sample its wares but could not, I know their malai kulfi is to die for! I wanted to have the Paneer pakoras and the kachauris and the desi ghee jalebis and the phirni and the bhaturas and the ma ki dal and the aam papar - all of this the next trip for sure! I know the patiala suits are gorgeous and awaiting me for the next trip. This is the land of senses alright- creamy yet textured, I promise to get back to this wonderful land soon
Posted by Mee at 09:53 11 comments: