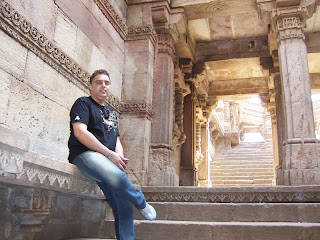 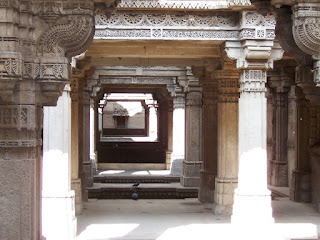 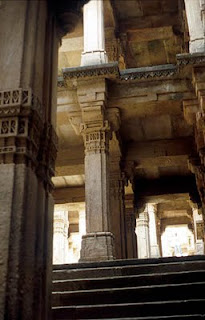 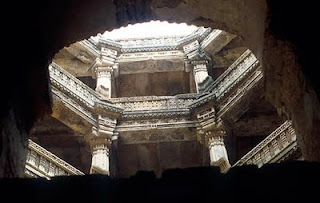 This site touched me emotionally- for its architecture, for its many stories of intrigue and drama, for the wonderful foresight that was available to the people centuries ago and so on.

Why have we forgotten the good old methods of conservation of water in modern times!! Today water is fast deplenishing, and no one seems bothered about saving this vital resource so long as your home and office taps spew and gush water. Ask those people who have seen water shortages, ask the people living in rain starved villages and you realize the importance or the lack of safe drinking water and its lack of availability

The Adalaj step is an architectural marvel steeped in history that I did not have the foggiest about. This is an intricately carved well that descends seven floors downwards into the earth (very different from the wells we have seen in our life time) Infact the lower you climb the temperature drops to surround you with cool air inside this giant well. Built entirely of sandstone, one can enter this step-well from three sides – the octagonal landings have carved colonnades and intricately carved niches. Openings in the ceilings above the landing have been provided to allow light and air to enter the well. Natural air conditioning! Each landing has wide space suggesting that people, especially travelers, rested here while on their journeys – to quench their thirst with the cool waters before resuming their journeys. Glorious yesteryears indeed! As we walked about exploring the architecture, marveling at the steps carved out of stone ( the steps are made of slabs of stones that inter lock into each other), discovering the various levels to this inner side of the well – the view captured by my camera got even more joyous. The many questions surrounding this beautiful discovery got answered on coming back home by my friends and their family elders who have lived in Ahmedabad for a very long time.

History has it that Rana Veer Singh ruled the area around Adalaj. He started the construction of the step-well, which he wanted to be the most beautiful one around. Unfortunately he was killed in battle by Mohammed Begda, who coveted the widowed queen, Rani Ruba. Mohammed Begda proposed marriage to the Rani. The Queen agreed on one condition; that he complete the 7-storeyed step–well at Adalaj first.

Complete it he did in 1499–and he came back to the queen with his proposal. The next day, Rani Ruba flung herself into the water and drowned.

One of the well kept secrets of some of the step wells was that it also had hidden doors and chambers that led royal people, specially the queens to escape from being captured. They would simply fall into the well and pretend to be drowned but in reality, they would open hidden chambers and escape elsewhere . Wonder if Rani Ruba survived the plunge and escaped to live?

I walked around the exquisitely carved chambers, slightly perturbed. What about the 3 graves that were found near the well? It is believed that when Mohammed Begda asked the artisans if it were possible to build another step-well like the one at Adalaj they replied in the affirmative. This proved to be their undoing and they were instantly put to death. Shah Jahan-esqe isn’t it? Perhaps that is why the Adalaj step-well stands unrivaled till today. Beauty, romance and tragedy – well, every well has a story to tell!

On a more logical note- I wish our Government or Private public partnerships could look at reinventing such models to capture water for multi-purposes, while being earth friendly and non intrusive to not cause any further imbalances in our climate.

I hope this post renews the zest in us, similar to what our ancestors felt, to ensure deliverance (water relief for the weary sun burnt traveler) without any wastage's ( collection and restorage points)
Posted by Mee at 20:31 16 comments: