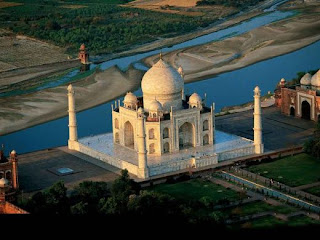 The Taj Mahal is more than magical. Words fail me in describing this wondrous, awe inspiring, beautiful, sensitively crafted iconic structure. It pulls the heart strings to soften, the hard edges of daily existence to fade away. Replacing the void with a bright warm glow of tenderness and love that shows one the immense possibilities of eternity and forever.

It’s no wonder that the famous and magnificent Taj Mahal in Agra is one of the New Seven Wonders of the World. The magnificent mausoleum was built by Emperor Shah Jahan in memory of his favorite wife Mumtaz Mahal. Researchers have us believe that the emperor was on his spiritual journey and looked to replicate Gods kingdom on earth. The well scaped gardens are the passage to paradise (the mausoleum) to meet with the Almighty and become his. There is much proof to this Scientology behind why the emperor inscribed the critical chapters from the Koran. All speaking of a release to the ultimate haven, the Paradise.

The Emperor intended to create a mirror image of the Taj in black marble as his resting place after death, across the river Yamuna, exactly across the Taj Mahal building but for inexplicable reasons the project did not see the light of day. Many archeologists are digging up the exact same area to find signs on why how and what this building never came up...

Contemplation, they say, is what one must do when in such places. I took in the hot summer afternoon slowly and without complaining. There were loads of touts trying to be our tour guide but we wanted to be left alone to discover the Taj Mahal by ourselves. We ambled along the water edges capturing still frames of glorious angle of this iconic monument. Both from inside and outside and also from the road on way and on return journey to the hotel. Folklore has it that the ceilings of this great marvel were decorated with precious gems and diamonds once upon a time. And the precious peacock throne on which the Emperor used to hold the courts proceedings which was bejeweled with thousands of valuables, today sits in the British Queens looted treasures from India. I can only imagine how exquisite it would have been in its glorious years…

For a moment there in pitch darkness inside the mausoleum. A guide was demonstrating to a batch of tourists how the gems in the ceiling would glitter and wink back during the times of prosperity - he requested everyone to switch off their torches and lighters etc and then in complete darkness he lit a strike- and asked everyone to look upwards to the ceiling. There were a thousand glittering lights dancing on the ceiling reflecting how gorgeous it must have been when adorned with precious gems and stones in a yester year. Wow that was a sight that the camera simply could not capture:(

Once on the outside again we hopped crazily trying to save our burning feet from the scorching marble on which the sun beat mercilessly. Read voraciously much that was inscribed on tablets all around about the Emperor and his Begum. Photographed extensively till my camera ran out of power. Not only did our visit to the Taj Mahal sensitize us to the era under the gaze but it also brought alive the romance and love and passion felt by 2 mortals to create an immortal chapter for themselves for many centuries to comes.

Some do’s and don’ts: Don’t wear your best pair of shoes when visiting the Taj, one has to remove them afar and walk the large distances bare foot. We lost our shoes. Try to get an honest guide who can walk you through the history without exaggeration. There are many good guides. Of course if you are adventurous enough you must discover the Taj for yourself. No eatables are allowed in- make sure you declare your camera and get the right passes for entry. Hang lose, absorb all.

The Taj Mahal is breathtaking
Posted by Mee at 02:22 6 comments: