Masai Mara has one of the highest densities of lions anywhere in World. Some experts say, the density of Lion population in the Mara is 30 Lions/100 sq kms!

Given the number of safari vehicles that throng to sight the Big 5, morning and noon, the animals have got smarter in Masai Mara. There is evidence that the animals have started to change their behaviour patterns to avoid tourist vehicles, hunting earlier or later when most people are still in bed or enjoying a sun-downer

Masai Mara is just like The Lion King. The only difference is that I never saw a crazy, old, mystic baboon that wore face paint and carried a walking stick:)  Often I heard the "Circle of Life" or "I just can't wait to be king" playing in my head, and as often the others in the car kept making references to the film... poor Sammy (our driver) musta been sick of the Lion King chatter, but he pretended not to mind. 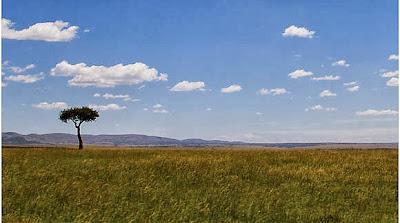 Sammy wound the car through the grasslands and gorgeous rocky landscapes with ease, alert for any sightings. On the plains that stretched in between, the grasses were pale against the deep green of the acacias that dotted the landscape as far as we could see. The imposing dark mountains peaked between the plains and acacias, in gorgeous contrast and the puffy clouds looked down on us wafting above, giving the landscapes a very dramatic edge.

Now the human herd started to appear. Vehicles were converging on the site from every point on the compass. The Jeeps  the Land Rovers, the Land Cruisers came thick and fast through the trails, across the fields and through ravines. No obstacle was going to stop any guide from treating his guests to the most revered, the most popular, hell bent for  –The Lion! 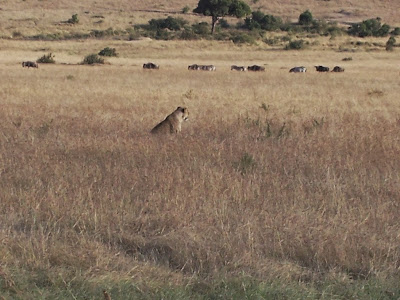 It was an incredible cat seemingly hiding in the bushes, with no concern for the human element. Or maybe they know they cannot attack a vehicle. At this point in the history of human/big game relations there is a comfortable peace.

This gorgeous lioness was pulling away from us, slowly and deliberately scoping out the valley, totally focussed on her prey, to the exclusion of all else. 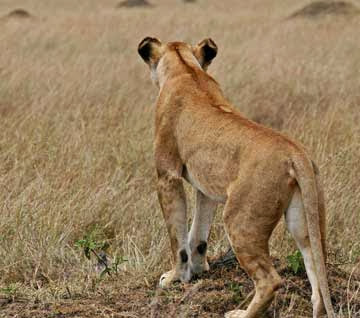 When a lion is approaching her prey in this cat like manner, you thank God, you are in a vehicle! She suddenly sprung into a speed and started in the opposite direction from where we were…at many spots, we lost here, because she’d merge into the tall grass, at some points again we’d spot her, crouching-catching her breath, till Sammy decided to drive towards us towards her 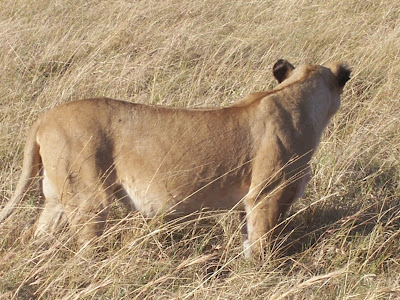 We finally caught up with her again - she was tired, very tired. Up-close we could tell now how heavily pregnant she was.

Before we could breathe again, we spotted 3 more lions- emerged from the bushes….all seemed to be circling, as if working together for a kill. (In my head, I thought these 3 lions, were helping the pregnant lioness find food) They encircled a huge herd of buffaloes, started crouching towards them,  a slow prowl, well camouflaged by the brown grass…(the lions can can crouch almost touching the ground! What amazed me was the buffalo's didn't seem to stir. They didn't seem very intimidated by the lions or by the safari vehicles. 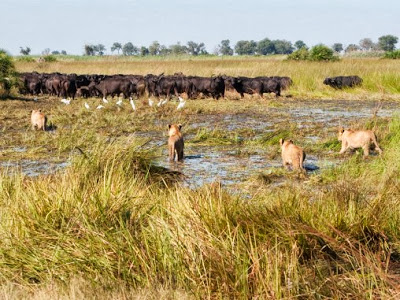 They probably outweigh one and could redefine the term fender bender with those horns of theirs :))

We wove our way through the herd, as the 3 lion's kept assessing the landscape and their prey.  Before we knew it, the lions picked up pace and sped past the buffaloes, till we realized the lions were now outpacing all animals and chasing a zebra! Soon to disappear from sight.

Lions are stealthy and smart and it was fascinating to watch them work together. They spread out and circle around. They take their time to plan for attack.  Hunting in Africa is dangerous for any animal and a lion needs to be sure that they can take down their prey before they go in for a kill. Buffalo are strong and can put up a good fight. For a lion to take down such a large animal, a lot of preparation and teamwork is needed. It could be hours before they make their move 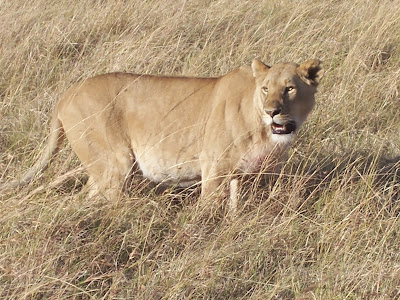 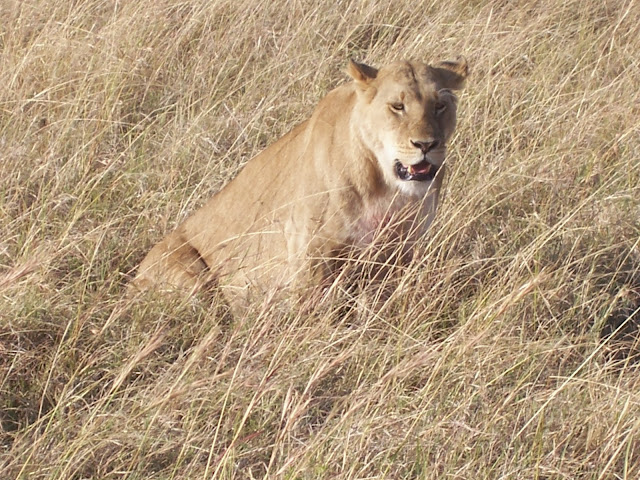 In the meanwhile this pregnant Lioness, was tired, she was giving up, panting hard. I felt gutted … wondered, when would she get her next meal. It was heart wrenching to see such a majestic animal not be able to get food.  Sammy drove us away…I found myself praying to God to be kind with her.

Within minutes the crackle and excited chatter on the wireless alerted us to something up ahead! We came upon 8-9 lions laying in the shade watching the humans watch them. 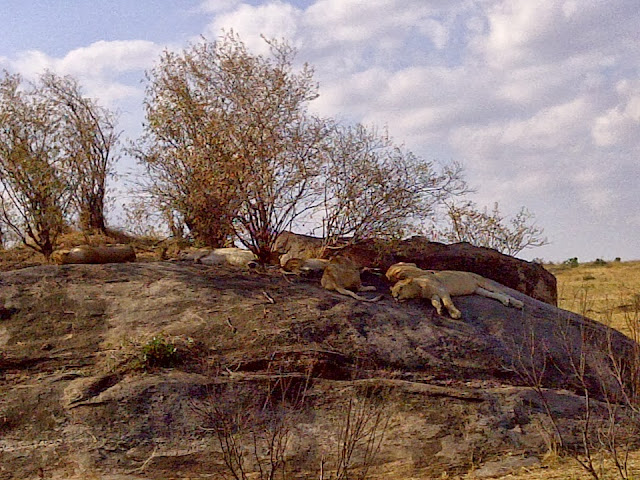 The hot sun beat down on the car, it was like a sauna, but we couldn't take our eyes away from the scene in front of us. The lions relaxed in the shade for some time and we watched them roll over, scratch and yawn.  They didn't have a care in the world. And why should they? They are the Lion Kings, on top of the food chain. They had very obviously just consumed a rather large lunch. They looked so lazy, that some didn't even bother opening their eyes to check our arrival! And some just looked too satiated and fat to even wake up fully or walk. We pulled up, turned off the engine and watched in silence for quite some time. 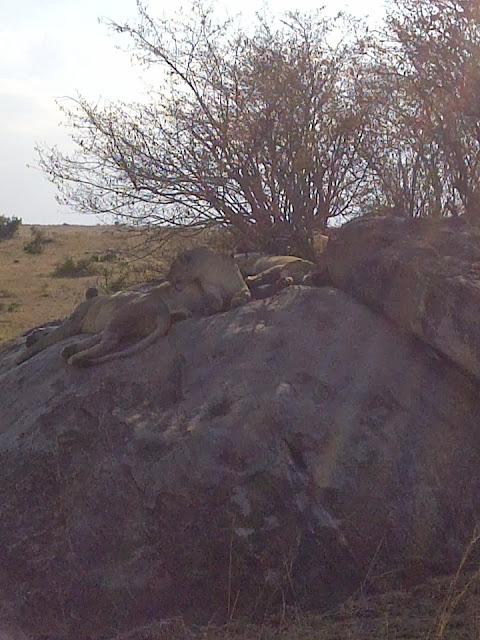 They didn't seem to notice or care. It was incredible. These are the world’s dangerous animals, but apparently not after a feast. It wasn't important that we didn't see a chase translating to a kill, just being close to these wonderful hunter-killers was privilege enough 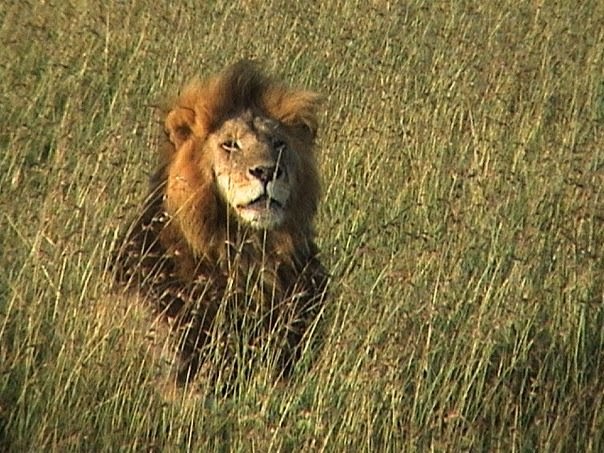 There is nothing funny about being on foot in the Masai Mara with so many lions around. Even in the vehicle, when this huge male lion approached us it was pretty disconcerting. At first he was so well camouflaged we didn't even see him, by the time he was only a few feet away from our vehicle, we’d seen enough…

This day was meant to be a Lion Day! Next we saw mom lions with cubs! What a sight, what a treat!

After months of huge anticipation and many attempts at getting a glimpse at these young cubs, the day finally arrived, and boy did I soak in all the goodness! To see many little bundles of lion fluff bounding towards your vehicle across the grassland is an absolute dream come true. 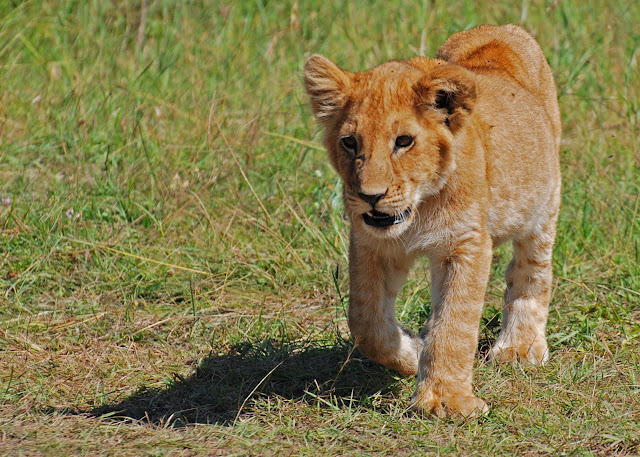 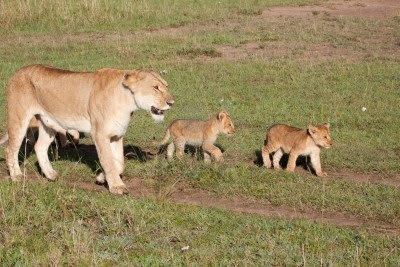 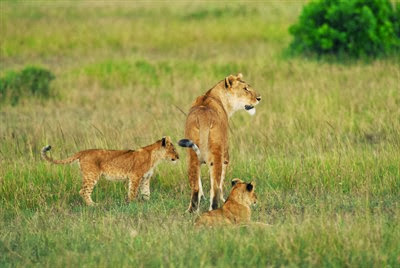 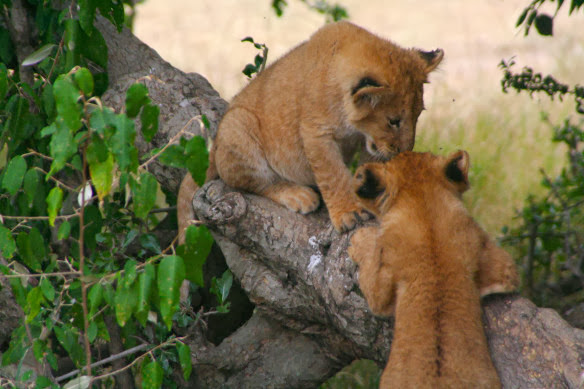 Baby lions look so cute and innocent; it’s hard to remember that in a few months’ time they would happily rip your throat out. These sweet looking miniatures, learning the tricks of the trade from mum, are mesmerising to watch. We sat observing them playing for a long time, constantly requesting Sammy, not to drive off yet, as the heart couldn't get enough of these cubs.

Go. Save your pennies and go! Africa is so amazing and you’ll never experience anything like it anywhere else. The people were lovely, the animals extraordinary—seeing them in their environment up close is so different than any zoo experience. The vast and endless sky—breathtaking. Over and over again I just found myself saying “Thank You God for your beautiful earth, for letting me experience this, and for all Your blessings!”
Posted by Mee at 01:13 18 comments: