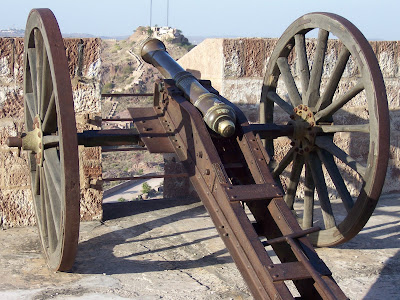 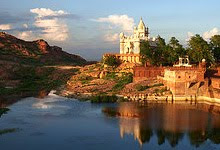 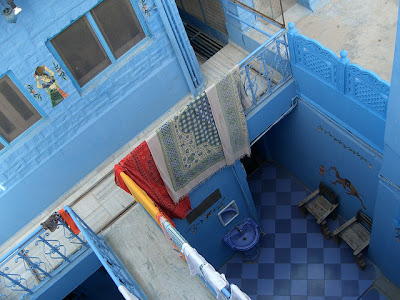 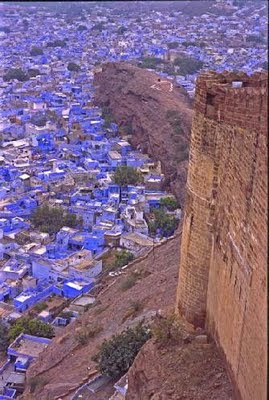 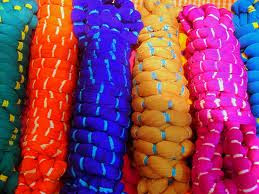 Making our way from the highway to the hotel, we soon realized that Jodhpur is a dirty, dusty and noisy city. On reaching our hotel, Jodhpur signaled, royalty and resplendence. A pluralism am well familiar with.

The Mehrangar Fort, clearly is the main attraction in Jodhpur. Masses of red sandstone used in construction in the hey days, transported via donkey drawn carts, not human labour (as was in building the pyramids of Egypt and the TajMahal in Agra). To minimize human effort, yet achieving precision, the blocks of sandstone were fixed, using a remarkable technique of placing ice between the blocks. The ice melted, the blocks were moved or turned into position and interlocked with each other, so that there was no need for a binding material, such as cement. What do you call this method? Sheer Genius!

We climbed to the top of the fort and whoa! the entire expanse below was blue in colour – awesomeness. It is thought that Brahmins – members of the priestly class – first took to coloring their houses blue (indigo?) to signify their domicile and to set them apart from the rest of the population. In addition they did the house doors in pink, and shutters in green. It’s like walking through a painting:) However, soon, the rest of Jodhpurs population followed suit and coloured their homes blue too. History does not tell us which brave non-Brahmin was the first to do it, yet it happened and since that day the people of Jodhpur have steadfastly maintained this tradition.

The fort is stunning. Within the fort there are little temples and museums. We walked around the area getting lost in the labyrinth of climbing alleyways and twisting side streets, catching glimpses of everyday life. Even stopped at a local chai shop to have fruit bun maska and adrak wali chai, given coffee is alien to this land:)

Did you know Jodhpur is the land of cotton? A variety of handmade fabrics, quilts, bandhini, leheriya to spulrge on. In addition every hue, shade,colour bangles you can imagine. And jootis so many in colour and design- everything vied for the purse.


What marred Jodhpur for us, were the narrow streets of old town filled with dirt, dust and garbage that cluttered every inch of the way. Crowded lanes too narrow for even a small car. Wiser to hail an autorickshaw here. Cows, excreta, human unhygienic’s, all left us gasping for oxygen!

The silver lining literally -:) seeing a small shop hand craft ornamental silver elephants. A couple of men would take scraps of silver, and thru the handmade assembly line, turn the scraps of silver into beautiful jeweled elephants. I watched this thru the confines of my car and lost track of time, waiting for the driver to get back from his meeting with a relative with whom he had to exchange some goods.

Jodhpur has numerous ‘pols’(large gates) - Loha pol, Jai pol, Chand pol - The walls close to these gates have battle scars created by cannon balls. On one of the gates are a set of numerous small handprints which belonged to the wives of one of the Rajput leaders who was killed in battle. So many stories to dig out, so many anecdotes to narrate...

Jaswant Thada, is the traditional cremation grounds of the Jodhpur royal families. Sheer beauty in marble. The main memorial is built to resemble a temple. Its walls are made of intricately carved sheets of marble. The marble slabs have been polished till they have become extremely thin and translucent. This makes the monument glow from within when the sunrays fall on its surface

On speaking to a couple of foreigners, I realized the locals, were jostling for income. By conning tourists into submission to get henna (mehndi) for their hands, by selling them pre-packed stuff like a bed-sheet - which they later realized was torn and scruffy (when they returned to their rooms), By pre-reserving one kind of room online, at one rate, and on arrival of the tourists, downgrading them to another, on the pretext that the hotel is full due to priority wedding bookings or some such lameness. This short changing cannot be good for Jodhpur in the long run.

Some big differences between Maximum city and Jodhpur: non-existent skyline, easygoing attitude of the people, rickshaws don't have meters! Enjoy the colours of Jodhpur, albeit, with a wee bit of grimace, get Blue'd:P
Posted by Mee at 06:27

Such a riot of colours for a desert country!:)

Despite its many drawbacks, there is something exotic and equally mysterious about such curious Royal kingdoms. Lovely post!

We will experience the same in nxt month as we willbe visiting jodhpur and surrounding spots, will lik to share the experience thn

@Ajoy: Am glad u will re-visit your decision:)

You are so right. Isn't this the problem across India? Hustlers everywhere? They do tend to mar the holiday experience, clearly:(

India has a vast potential to mint money thru tourism. Only if the attitudes wld change and infrastructure fall in place.

It sounds like Jodhpuris are taking tourism for granted and for sure that will have disastrous consequences. Cheating/fraud leaves only a bad taste and spreads negative word-of-mouth publicity.

@Mike - Rajasthan is stunning, no doubt on that!

@Gita - O yes, tales of mystery, treachery, love its all there in the desert land. The trick is to find some one local who will share them willingly

@R Niranjan Das - Actually the Blue is Indigo (honest!)- but since all the locals call it blue (simplification perhaps?) - Blue is it!:)

@Sheila - It indeed is a problem in India. But as much exists in the world too. The principle is simple larger fish prey on smaller fish in unknown waters. This is no justification tho.

@Sanjiv - My sentiments indeed too:(

@Neeraj- :) Blue the colour when made plural becomes sad (blues):)- English is a unique language:)
Who would have thot a desert land can show off such vibrant colours:)

useful for me as am going to tour rajasthan in september!!

useful for me as am going to tour rajasthan in september!!

@magiceye: good to see u here. have a wonderful trip. lk fwd to the images frm thr:)

Beautiful! Thanks for sharing this blue with me.

Nice write-up..
Use of ice... what a technology they have used those days itself..

@mycreationz thx for visiting my blog:)
Just peeped into ur blog, loved it! Will come back to it in a bit.

This is a very interesting blog you have, keep it up...may i please have your email id..
Thanks.

Hi there,
Every time I visit Ahmedabad, my in-laws insist that I should visit Jodhpur once. I never gave a serious thought to it.
Going through your post, I have mixed feelings now.
I don't know whether I'll visit Jodhpur or not. What do you suggest?.

I write to you on behalf of The Viewspaper (www.theviewspaper.net) which is India's largest youth paper and the 5th largest media company on Facebook.

We are organizing the World's Largest Tweet-A-Thon! and would like to invite you as a panelist for the same.

From American political journalists in the 1950s, to The Economist magazine not so long ago; speculation has run rife about India and whether we will survive as a nation.

Poverty. Corruption. Terrorism. Disease. Currency woes. We’ve got it all, and more. We’ve been written off, doomsdayed, delegitimized – but we keep coming back! What is the root of this appetite for adversity, this solid resilience?

It is our nation’s optimism. No matter how much you bring her down, India feels up!

A first of its kind initiative, the #IFeelUp Tweetathon is a 3-day virtual conference, which delights in the irrepressible state of the nation, in spite of its laundry list of issues. Over 72 hours, we’ll be bringing in 400 panelists for non-stop discussion, and that’s where you come in.

We would like to invite you as a panelist for a 30 minute session wherein you can participate from any part of the world.

If you're interested, kindly email us your contact information so that we could provide you with more details about the event.

I look forward to hearing from you.Please mail us at garima@theviewspaper.net.

India is a wonderful place. And Jaipur obviously is one of those places where travelers find their solace. It is delightful city for creative minds, photographers, film makers, authors, travels and all possible people. Jaipur is full of color and has this typical ‘Indianness’ to it. The city has its own ingredients for amusing people and I have seen that it is a photographer’s delight. Gorgeous, colorful, utterly Indian, that’s how one can describe Jaipur. And did I mention, it’s the blue that makes it even more ‘colored’.

The contents are really good…
mumbaiflowerplaza.com

Hey you have added really beautiful and unique pictures to your blogs that I have never seen before. Your compilation is just great. For more information visit Yatra Unlimited

The contents are really good.Thanks for sharing.
from - chennaicakesdelivery.com

The contents are really good.
www.puneflowersdelivery.com

Jodhpur is the second largest city in the Indian state of Rajasthan and is located in the border of the Thar Desert.This city is known for historical monuments, palaces, forts and temples.Thanks for providing insight on jodhpur..
Tour and Travel Companies in Panchkula

Thanks for sharing such a beautiful blog.
flowersbangalore.com

You have a gift, venting out your anger in a nice way, I hope you understand why am I pissed off most of the time. Ppl are just spoiling rich piece of history,and it's in all the cities , at this rate it won't be there for long. Main source of income for this state is tourism, and still ppl aren't at all interested in saving.

Nice blog… thanks for sharing this information with us, We are Dry Fruits Wholesaler.